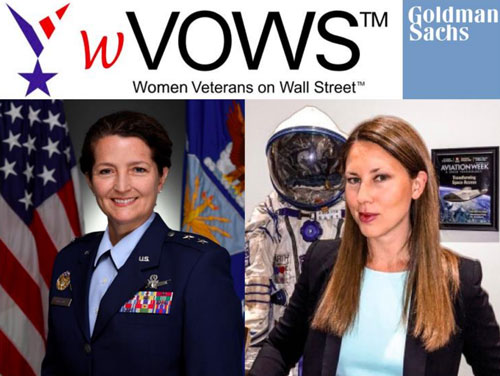 In celebration of Veterans Day, you are invited to join us for a discussion with Maj. Gen. Nina Armagno, Director of Space Programs, Office of the Assistant Secretary for Acquisition at U.S. Air Force and Laetitia Garriott de Cayeux, Entrepreneur and Space Investor. Panel moderated by Gregg Lemkau, Co-Head of Investment Banking Division (IBD).

Laetitia Garriott de Cayeux is a technology entrepreneur and private investor with a passion for technologies that can positively impact the future of humanity. She invests in science and technology companies across a variety of sectors, from artificial intelligence, to the commercial space industry, including early investments in SpaceX and Lynk which demonstrated in 2019 the first “cell tower in space.” She was also instrumental in beamed energy becoming a part of NASA’s technology roadmap in 2015, as cofounder of Escape Dynamics which ranked third of the “Top 10 World’s Most Innovative Space Companies” by Fast Company, and whose technology was featured in Scientific American as “World Changing Idea.” She started her career in 1999 at Goldman Sachs where she advised on over $8 billion in cross-border M&A she then served as an Investment Principal at TPG-Axon, as an Investment Partner at Renaissance Technologies, and established her own investment firm in 2008. She also serves as a Board Member of the National Museum of Mathematics, a Truman Security Fellow, a member of the Council on Foreign Relations, the Economic Club of New York, and Women Corporate Directors, and holds an MBA degree from Harvard Business School.

Gregg Lemkau is co-head of the Investment Banking Division (IBD). He is a member of the Management Committee and IBD Executive Committee. Gregg has advised on hundreds of transactions during his career at Goldman Sachs and has spent significant time with clients across all sectors globally while working in offices in Europe and the US.

Previously, he was co-head of Global Mergers & Acquisitions. Gregg has also served as global co-head of the Technology, Media and Telecom Group, global co-head of the Healthcare Group and chief operating officer for the Investment Banking Division. He served as chairman of the Firmwide Commitments Committee from 2011 to 2015. Gregg joined Goldman Sachs as an analyst in Mergers & Acquisitions in 1992 and was named managing director in 2001 and partner in 2002.

Gregg serves as chairman of the Board of Directors for Grassroot Soccer, a nonprofit organization using the power of soccer to fight against HIV and AIDS in Africa. He also serves as chairman of the Dartmouth Athletics Advisory Board and is chairman of Friends of Dartmouth Soccer. In addition, Gregg is on the Board of Advisors for Team Rubicon, a nonprofit organization whose mission is to unite the skills and experiences of military veterans with first responders to rapidly deploy emergency response teams. He also serves on the Board of Trustees of St. Luke’s School in New Canaan, Connecticut.

Gregg earned a BA in Government and Economics from Dartmouth College in 1991.