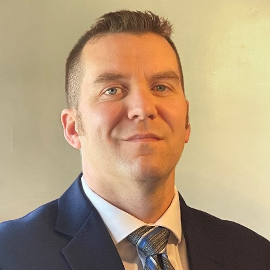 Nate enlisted in the Air Force as active duty in 2002.  He was stationed in locations such as Massachusetts, Montana, and New Jersey, and served in many roles including security, law enforcement, aircraft maintenance, and aircraft parts manufacturing and repair.  He retired from active duty in 2022. He holds a couple of Associate of Science degrees and is currently enrolled in a Bachelor of Business Administration degree program with Southwestern College.

Nate’s first assignment was Hanscom Air Force Base, Massachusetts where he started as an Installation Entry Controller at the installation gates. As his career progressed, he became an Installation Patrolman, responsible for traffic and public safety, base security, and first response to emergencies and other incidents.

Nate was soon deployed to Bagram Air Field, Afghanistan where he enhanced the physical security features of the airfield, such as fencing and concertina wire, barrier plans, and access control points. He also served as a tactical security element member, providing security for small, indiscrete convoys of counter-intelligence teams. On these security details, the team seized and collected munition caches, denying terrorist organizations the means of carrying out attacks against the coalition forces.  He also served as a post-attack reconnaissance team member, investigating rocket attack origin points for intelligence value.

When Nate returned from Afghanistan, due to his rich technical expertise, he was selected for a role in the training section. He developed and delivered law enforcement training, force-on-force training, airbase defense training, as well as many other topics for over 150 unit personnel.  In this role, Nate was recognized as an outstanding performer during an Operation Readiness Inspection for delivering training which prepared his unit to pass with an excellent rating.  During his time in this role, Nate met his wife Allison, and they soon married.

After his time in this position, Nate deployed to Camp Bucca, Iraq where he led a team to enhance the security of this forward operating base. Nate and his team completed rigorous training to become operators of the RQ-11-Raven-B small unmanned aerial system.  His team provided aerial surveillance around the installation and provide intelligence information for teams operating in the nearby city of Um Qasr. The Air Force Central Command identified his team as the best Raven-B team in theater.

Recognized for his understanding of nuclear security regulations, Nate was selected for the position of nuclear weapon storage area Electronic Security Systems Program Manager. He oversaw the installation of a first-of-its-kind remote target engagement system as well as managed the intrusion detection system program. In this position, he was recognized as an outstanding performer during a Nuclear Surety Inspection for maintaining flawless, well-documented, security programs.

Nate was shortly thereafter involved in a manpower realignment program called Non-Commissioned Officer Retraining Program (NCORP) and he was retrained to become Aircraft Metals Technology. He learned the fundamentals of milling machines, lathes, heat treating, and welding. After training, he was reassigned to Joint Base McGuire-Dix-Lakehurst, New Jersey where, shortly after arriving, his second daughter, Natalie, was born.

Nate spent the second half of his Air Force career supporting the maintenance needs for a 40-plane fleet of KC-10 refuelers and C-17 Cargo planes. He became a certified aerospace welder, a skilled machinist, the local authority on heat treating aluminum and other aircraft metals, and the go-to guy for automated manufacturing solutions and training.

He deployed once more to Ali Al Salem Air Base, Kuwait as the lead machinist and welder. He supported the manufacturing and repair needs for a large fleet of C-130 cargo planes, MQ-9 drones as well as various coalition partners’ airplanes, helicopters, and occasionally ground vehicles.  He was a key team member in repairing a damaged C-130 at an austere site. Working with aerospace engineers, he designed, manufactured, and installed structural components to enable a one-time-flight to the home station for permanent repairs.

Shortly after returning home from Kuwait, Nate retired from the Air Force and participated in a Department of Defense Skillbridge program with an organization called Hiring Our Heroes (HOH). Through HOH, he was selected for a corporate fellowship with Barclays US Consumer Bank. During the fellowship, he spent 12 weeks as a project manager for the digital product marketing office. Upon completion of the fellowship, he was hired into a permanent role as Business Program Manager on the Barclays Bank Delaware Governance Team. Drawing from years of military project and program management and organizational skills, he provides oversight and support for business and regulatory-related projects for Barclays Bank Delaware.

If think your story or a colleagues transition story would be a good addition to the Veterans on Wall Street Veteran Spotlight Series, please reach out to Emilee Gates at emilee.gates@bobwoodrufffoundation.org.